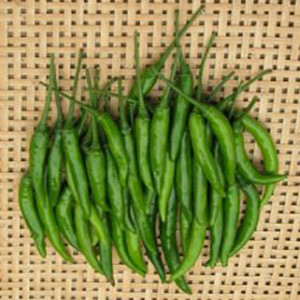 A fiery and flavor-packed chili often known as a Bird Pepper. The Capsicum annuum var. glabriusculum has many names and is native to Texas, Florida, Central America, Northern South America and the Caribbean. In Florida, they are also known as grove peppers, given their propensity to grow wild in citrus groves throughout central and south Florida. In the Caribbean, they are called bird peppers because birds would eat the fruit and spit the seeds, thus spreading them around in fields. Hot Thai pepper can be harvested when green or red. The plants produce prolific harvests of small 1.5" long, pungent peppers that are traditionally used in Asian cuisine. Hardy to 55°F.. Maturity: Approx. 75-80 days

Culture: Start seeds inside 6 weeks before last frost date (or 8 weeks before expected transplanting date). Keep soil warm until emergence. Seeds will not germinate in cool soil and planting out too early may affect plant vigor. Harden off plants carefully before transplanting. Prepare fertile, well drained soil. Transplant in late spring/summer (soil temperatures at least above 60°F) in a very warm and sunny location. Fertilize as needed. Too much nitrogen will produce lush foliage and few fruits.