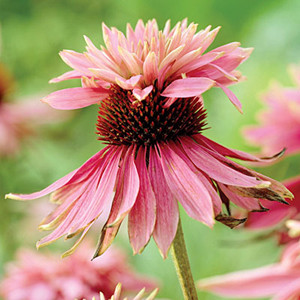 This is a strange duck!!! A two-tiered purple coneflower,  A german plantsman named Eugen Schleipfer found a Echinacea that was very different from any of the others.  So from many years of selection became a reliable stable seed with the two tiered flowers.  It has a shorter set of petals on top of the cone while the skirt of longer deep rose pink petals emerged from the base of the cone. We did find that some of the older plants in the garden did produce a single flower with the first year just a few, and from the second year forward a higher percentage of singles progressed. Second-year plants produce a large magenta-pink daisies with a second smaller flower produced on top of each dark brown central cone. Blooming starts in midsummer and continues for weeks. Coneflowers are sturdy and carefree perennials. Flowers are very attractive to butterflies. Seed heads are useful in dried arrangements. Excellent for cutting. Adapts to a wide variety of soil conditions. First-year plants usually exhibit the typical single blooms before becoming double in the second year. Height of 27-29 inches with a plant spread of 18-23 inches. Great as a border, cut flowers, containers.  Deer resistant and drought tolerant.  Full sun or partial shade with normal or sandy soil. Zones 3-8. Water requirements are dry to medium.