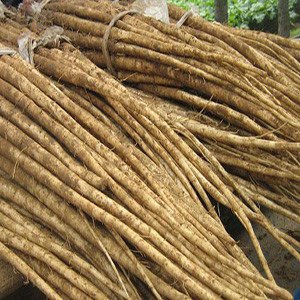 Burdock root, greater burdock or edible burdock root is called “goboue. An early variety , that is  light skinned, edible burdock or gobo that grows 12-16" long. This relatively short length makes it suitable for home gardens. In Japan, this variety is used fresh for salad and has a nice earthy aroma. This species is native to the temperate regions of the old world, from Scandinavia to the Mediterranean, and from the British Isles through Russia, and the Middle East to China and Japan, including India. It is naturalized almost everywhere and is usually found in disturbed areas, especially in soil rich in nitrogen. It is commonly cultivated in Japan. Japan where it is called gobō,  Korea where it is called ueong, Italy, Brazil and Portugal, where it is known as bardana. The root is very crisp and has a sweet, mild, and pungent flavor with a little muddy harshness that can be reduced by soaking julienned/shredded roots in water for five to ten minutes. The harshness shows excellent harmonization with pork in miso soup. Apart of its obvious culinary value, it is also valuable for its high content in dietary fibers and beneficiary nutrients. It has been utilized as a medicinal plant with diuretic, diaphoretic, and blood purifying capabilities. A classic Japanese dish called kimpira is made with shaved pieces of burdock, julienned carrots, celery, all stir-fried in sesame oil with soy sauce, rice wine, sugar, and hot peppers.  Muturity= 85-90 Days

Tips on Growing Burdock from Seed