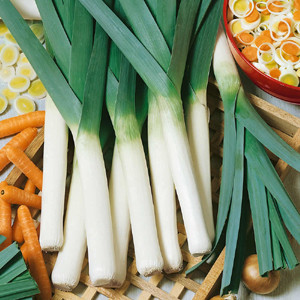 90-120 Days to Maturity. American Flag Leek is Sweet and mild, leeks are gentle on the digestive system and play the role of onion in dishes, only toned down. Unlike onions, leeks don’t produce bulbs, but stash their flavor in thick, juicy stems that look similar to giant scallions. American Flag Leek is a classic leek and the predominant choice for home gardeners. Leeks are cold tolerant and can be left in the garden into fall for an extended harvest. Leeks are most famous for leek and potato soup, but they’re also good steamed like asparagus, oven-roasted, chopped in quiche, or wrapped in ham and baked (perhaps with a little cheese on top). A close relative of both onion and garlic, leeks are most commonly used in soups and stews, but can also be used effectively in salads. TX,  FL,  OR Ag Extensions recommend this variety as this will performs well for their region.   300 Seeds per Package.